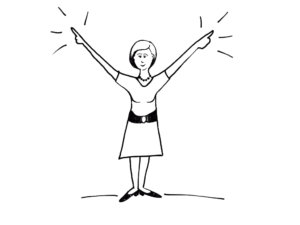 I sometimes get asked if I do ‘cartooning’.

On the surface, I get that what we do as visual recorders can LOOK like cartooning and certainly some of our global tribe are super-skilled in this area…

(I am thinking back to the loving / longing envy I felt when I looked on Jørn Nielsen‘s charts the first time I met him in Hawaii… the man had just done a session capture and his large chart was entirely black ink – ah, but the power of his people and drawing. I came to learn Jørn has drawn all his working life including many years with Walt Disney Company! *sigh* down, my loving / longing heart for that level of drawing skill.)…

But I digress, back to the question of cartooning… my answer is always a resounding ‘nope’. It’s a field that is a specialty all on its own and an area that I continue to try to improve my skills in but would never raise my hand to say I had ‘arrived’.

So, imagine the joy when I got to work alongside Andrew Fyfe recently, one of Australia’s best known and loved cartoonists.

I had been asked to visually record two workshops for a big infrastructure project that is redesigning a metropolitan public transport network. My client advised that the organising team was also engaging a cartoonist, Andrew.

Andrew has had a career spanning two+ decades. I don’t want to show his age (or mine) but I remember him from a very popular Saturday night family show ‘Hey, Hey, It’s Saturday’ with Daryl Somers. With a camera trained over his shoulder, Andrew punched out rapid-fire drawings and caricatures of guests, presenters and his jokes as they came up. I was always fascinated (and a little terrified) at what I imagined was the pressure he was under to perform. He was part of the ‘Hey, Hey’ team for 14 years!

Andrew’s drawing skills are outstanding – he has mastered such a level of practice that he remains in constant demand for live corporate events, as well as gift caricatures and white board animation. 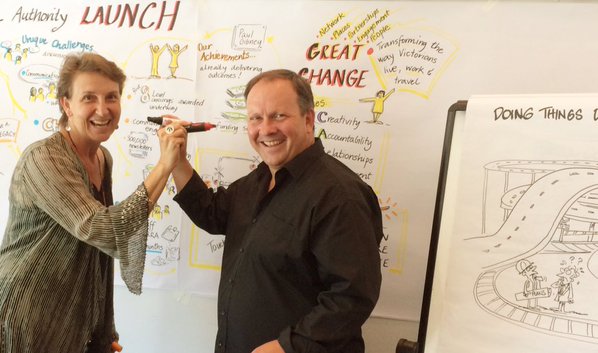 At this event last month, what interested me greatly at the end of the day was the vastly different outputs. And how those two outputs were complimentary not at all a duplicate of the content, as one might fear.

Andrew made 25+ flipchart drawings – each with their own focus and story. They were like the Polaroids of the day.

I captured the discussions and key points on a 5m+ chart. It was like the panoramic photograph – through time and space – of the day’s conversations.

Together, they provided a rich and engaging picture of the event that has all the positive hallmarks of our crafts – a key point of interest, inspiration and delight for participants during the event; and a tangible memory anchor to take back to the workplace helping the teams to reap the benefits of the day in a more lasting way.

The humor that came through Andrew’s caricatures and cartoons added to the participant experience. Andrew had people constantly laughing with his witty drawing insights of the project and the presenters…

and you know what they say about laughter…

it makes us more relaxed and receptive and adds to morale.

I also believe the visual aspects of both our roles was a catalyst for participants to ‘give themselves permission’ to play and be creative during the sessions.

So, when you are organising your next event or being engaged to capture a forum, consider the added value that including a cartoonist might have.

And for all the graphic recorders, let’s keep up our drawing skills!

*** Stay tuned, Andrew has agreed to come into the Spotlight – his interview will be available early next year. ***

1 If you have never heard of FISH! Philosophy – go to the FISH! Philosophy webpage and read more. Who knew playing and throwing fish around at a fish market could lead to a worldwide program to help organisations and schools improve energy and morale in their workplaces???!