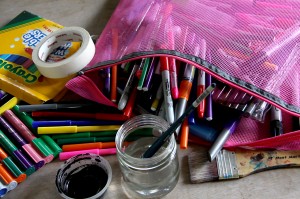 An exploration in two-handed drawing

Ever been a little bored and tried doodling with both hands? How about experiementing with your ‘other’ hand to write your name? When I’ve done this in the past, I find it feels pretty weird but also interesting – both the sensation and the result. Yesterday, Dave Lovegrove* – an artist and art teacher – and I decided to do a tandem two-handed drawing exercise.

Here’s what we did:

Duration: we allowed one to two hours

After about 30 mins, we each selected a black marker and started to emphasise certain marks or patterns that appealed. Then using black ink and calligraphy brushes we added another layer of marks to the drawing.

The result: A large-scale image that has two distinct sides – reflecting the two artists and our different physical approaches. Dave’s side is angular and edgey and mine is rounded and swirly. The layering of colours and use of different drawing implements makes an interesting final image – there is a lot going on and the more you look the more you see / discern from the marks and patterns within the layers.

As a process, the tandem approach was great. At times, we talked as we drew, putting into words what we were experiencing. I thoroughly enjoyed the first part where we were breaking ‘new ground’ on a clean white expanse. I also enjoyed the use of ink and brushes – the marks were very definite and that was extremely satisfying. I am aware that this style of making marks and working with the patterns that emerge is a preferred way of working for me. I felt a kind of freedom from the burden of reproducing something – a representation of an object or likeness of a person.

Drawing is part of my work as a graphic facilitator and recorder. As a result, I find the two-handed drawing very freeing as an exercise in drawing movement. I get a physical ‘release’ similar to experiences I have had in yoga and other physical exercise that is akin to an endorphin rush.

Our exploration in two-handed drawing is part of my 2013 approach to expanding my drawing skills and repertoire.

Stay tuned for the 10 pens for 10 fingers drawing adventure with Dave – currently a work on the ‘drawing’ board!

Have you tried two-handed drawing? What has been your experience?

INTERESTED IN EXPLORING YOUR CREATIVITY? Check out the Creatively Fit courses I offer.